Asia Ability worked with an international tobacco company who were looking to take their merchandising and sales teams for an intensive 2-day team building retreat on a secluded island. The Program was developed in liaison with the in-house training department, and the emphasis was to make the full 2 days busy with core team building activities.

Upon arrival and check in on the island, the 150 participants were split into 10 teams and the teams were instantly put to work. They were briefed about the Commercial Break programme, on the objective of the programme and the methods and rules to the activity. Safety was reiterated to the crowd and a safety moment displaying safety videos were shown at the start prior to the commencement of the activities. The participants were able to utilize the ample areas on the resort as it was by the seaside, had lush greenery and was the only facility in a secluded area.

When the participants returned, they submitted the completed videos to us, which were then presented to the whole company during their poolside dinner. Each team was rated by a panel of judges, to emulate something like that of an award night. The points awarded were then carried forward to the programme they had the next day that consisted of Team Survival and Flat Out Afloat.

This programme fit the objective of this company very well as it was a retail company, and by trying to make their own advertisements, they got an insight on how their company is portrayed and viewed by the public eye, and the lengths the company goes through to protect its image.

Paired with the next two activities, everything merged perfectly as the programme involved much more high impact, physically demanding feats which complemented Commercial Break, where it was less physical but mentally challenging and the participants got to immerse in creative ideas to produce their advertisement.

The feedback from the participants was that they really benefited from learning how to delegate tasks calmly, assigning roles according to their existing skills sets, discussing who would be best for certain roles and the value of coming to a consensus as a team. 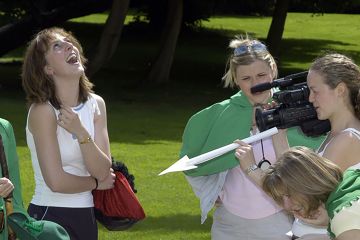 Design and film a commercial that communicates key messages.